As New York Firearms Lawyers we are often asked about the legality of certain specific guns in New York given the very complex laws about what firearms may be owned in New York.  A relatively new pair of firearms present some very interesting legal issues given the current state of New York Law and just may fit into a loophole under existing New York gun laws. 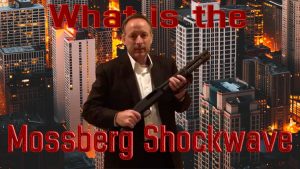 The Mossberg Shockwave is a gun that has a barrel length of just over 14 inches and is a smooth bore (no rifling).  Its overall length is just over 26 inches and it has a magazine capacity of 5.  The shockwave is pump action and is fitted with a grip that appears to be a pistol grip that Mossberg refers to as a bird’s head pistol grip.

The ATF has ruled that this particular gun is a firearm within the meaning of the Gun Control Act of 1968 but not within the meaning of the National Firearms Act (NFA).  This allows these guns to be sold and transferred without the paperwork (tax stamp) necessary to transfer guns that are subject to the NFA such as sawed off shotguns, silencers or fully automatic machineguns.

New York gun laws are generally more strict limiting possession of far more guns than Federal Law does.  The question is how would New York classify the Shockwave.

So the question remaining is whether under New York Law the Shockwave (or the Tac-14) is a firearm under New York State Law.  If it is a firearm, then one would need a license issued under Penal Law Article 400 to own or possess it and would need to be registered.  Under Penal Law 265.00 (3) a firearm is any pistol or revolver.  The definition of pistol and revolver are not given in the penal law which generally means that we would use the ordinary definition of those words.  Clearly, the Shockwave or Tac-14 are not revolvers, they have no revolving cylinder or chamber.

The last and most important question is whether the Shockwave and/or Tac-14 are pistols.  If so, while legal in New York, you would need a license to purchase one and it would need to be registered on your license.  Would the New York authorities register such a weapon?

The answer is that the Shockwave and Tac-14 do not appear to be pistols.  The definition of a handgun under New Jersey Law (persuasive but not binding in New York) requires that the gun be designed and manufactured to be shot with a single hand.  An examination of the Shockwave shows that there is a sling under the pump grip that is designed to contain your “off” hand or in the case of a right handed shooter the left hand.  The shockwave was specifically designed to be fired with two hands.  A further examination of the definition of pistol on dictionary.com also describes a weapon designed to be shot with one hand.  Therefore, the Shockwave does not seem to fit the definition of a pistol.

In addition, I have heard people talk about the weight of this gun possibly violating the assault weapon ban in New York under the Safe Act but because the Shockwave is not semiautomatic it cannot be considered an assault weapon under New York Law.  See Penal Law 265.00 (22).

Please be aware that no Court has considered the issue in New York at this time but based upon the above, it appears that both the Shockwave and the Tac 14 are legal to own in New York.