In a recent New York Criminal Assault case which was appealed to the New York Appellate Division, the defendant asked for his guilty conviction to be reversed. Originally, the defendant was found guilty of assault in the second degree after an altercation in a bar one evening. On appeal, he argued that the court should have given the jury the option of deciding that he did not have the necessary guilty intent because he was intoxicated, and his judgment was clouded by alcohol. Although, voluntary intoxication is generally not a defense in New York, Penal Law sec 15.25 makes clear that evidence of intoxication can be used to negate an element of  a crime, such as intent.  The court ultimately agreed with the defendant and reversed the judgment.

According to the opinion, the defendant in this case walked into a bar one evening holding a bottle of Heineken beer. He interacted with other patrons of the bar, and witnesses later described his behavior as “loud, obnoxious, and argumentative.” At one point, the bartender asked the defendant if he had a designated driver.

In an unclear string of events that followed, the defendant asked another individual to step outside. At this point, the defendant allegedly assaulted the victim, and he was later charged with assault in the second degree. At trial, the jury found the defendant guilty as charged.

END_OF_DOCUMENT_TOKEN_TO_BE_REPLACED

arrested for bringing his licensed pistol into Manhattan won a five-year battle to clear his name yesterday after the Appellate Division ruled that the police violated the gun owners Fourth Amendment rights after they stopped a vehicle that he was a passenger in for allegedly running a red light.  Tilem & Associates, PC,  won the decision suppressing the gun and ordering the indictment dismissed after they appealed the denial of the suppression motion and ultimate plea on behalf of the licensed gun owner whose first name is Sandley.  You can read the appellate court decision here.

END_OF_DOCUMENT_TOKEN_TO_BE_REPLACED

An appellate court recently issued an opinion affirming aggravated assault charges against a New York criminal defendant. Using one accusatory instrument for two separate incidents, prosecutors charged the defendant with harassment in the second degree, and two counts of aggravated harassment in the second degree. The complainant alleged that the defendant threatened her daughter in one incident, and the second incident involved multiple phone calls from the defendant. Among other issues, the complainant contended that she recognized the defendant’s voice, and the calls made her fear physical injury to her and her daughter. The defendant pleaded guilty to an underlying charge of disorderly conduct, which was added to the pleading. However, on appeal, the defendant challenges the accusatory instrument’s facial sufficiency.

A person is guilty of second-degree harassment if they intend to harass another person followed by specified conduct, and the actor knows that the conduct will cause the other person to fear harm. Most of these charges stem from a threat and actions such as phone calls, texts, emails, and physical threats, or a combination of these behaviors. Here, the complainant’s accusatory statement was facially valid because :

END_OF_DOCUMENT_TOKEN_TO_BE_REPLACED

Throughout the New York criminal trial process, it is not uncommon for comments or evidence to come into the trial that could prejudice either side. Courts take precautions to instruct attorneys and witnesses not to say certain things, and to avoid particular topics. However, the jury will inevitably be exposed to comments or evidence that it should not have seen or heard. When this happens, it may result in a mistrial. However, courts are reluctant to declare a mistrial unless absolutely necessary and, in many cases, will provide the jury with a “curative instruction” instead.

Recently, a state appellate court issued an opinion in a New York assault case discussing whether a juror’s comments during the trial necessitated a mistrial. Ultimately, the appellate court held that the trial court’s curative instruction was sufficient to cure any prejudice to the defense.

According to the court’s opinion, the defendant was on trial for second-degree assault. Two other men were also on trial for the same crime. During the trial, in an attempt to goad the complaining witness, one of the defendants’ attorneys repeatedly asked the complaining witness whether he referred to the defendant by a racial slur. The defense attorney used the actual word, rather than self-editing. After repeating the word multiple times, one of the jurors stood up and exclaimed, “Please, I am not going to sit here . . . and have you say that again. Don’t say it again or I’m leaving. . . . I find that very offensive.”

END_OF_DOCUMENT_TOKEN_TO_BE_REPLACED

In a New York criminal jury trial, the judge has several critical roles. In general terms, the judge determines the “rules” by which the trial will be conducted. For example, the judge will resolve all pretrial motions, manages the jury selection process, rules on objections during the trial, and instructs the jury at the conclusion of the trial. One of the most essential roles of a judge is also to act as the gatekeeper, meaning the judge will determine which evidence will be presented to the jury.

Not surprisingly, a judge’s rulings on these issues can drastically affect the outcome of a trial. And because judges are human, they are prone to making errors. In fact, that is the very purpose of the New York appellate process; to review the trial court’s legal decisions which led to a conviction. Thus, when a party believes that a judge made an error at trial, that party must object. When a party objects to a ruling, they must state the basis for the objection. Typically, when an objection is made, the judge will hear argument on the objection outside the presence of the jury and issue a ruling. It is up to the party making the objection to make sure the judge knows the basis of the objection and is aware of the legal support behind the objection.  AS a general principle the Judge must be given an opportunity to fix the error in order to preserve your right to appeal on an issue.

When an appellate court grants review of a case, it will typically consider all arguments raised in the defendant’s brief. However, an appellate court may apply various standards when reviewing an error. For issues that were properly raised at trial, an appellate court uses what is called “de novo” review, meaning that the court will not give the lower court’s decision any deference.

END_OF_DOCUMENT_TOKEN_TO_BE_REPLACED

Earlier this month, a state appellate court issued a written opinion in a New York manslaughter case discussing whether the evidence presented by the prosecution was legally sufficient to sustain the defendant’s conviction for manslaughter. Ultimately, the court concluded that the jury’s decision to convict the defendant, given the evidence, was proper. Thus, the court affirmed the conviction.

According to the court’s opinion, the defendant was a board-certified doctor in anesthesiology and pain management. The defendant operated a practice in Queens, which the prosecution characterized as a “pill mill” in which the defendant would see patients complaining of pain and prescribe medication without verifying the source of the pain or ordering any diagnostic tests. The defendant only accepted cash and charged extra for higher doses of opioid medication.

Two of the defendant’s patients died while overseas, from a combination of oxycodone and alprazolam. Both men filled prescriptions, written by the defendant, for these medications shortly before their death. Pills containing both medications were found on the men’s bodies after their death.

END_OF_DOCUMENT_TOKEN_TO_BE_REPLACED

In a New York criminal trial, after both parties present their evidence, the judge will instruct the jury on the applicable law. The court’s jury instructions, or jury charge as it is also known, is an essential part of the trial because it frames how the jury will view the case and what questions the jurors must answer. Like other phases of the trial, each side can present proposed jury instructions to the court in hopes of obtaining a favorable instruction.

END_OF_DOCUMENT_TOKEN_TO_BE_REPLACED

In New York, Burglary is a serious felony.  The facts of the Burglary will determine whether there is a mandatory minimum state prison sentence associated with a conviction and how long that state prison sentence will be. In April of 2019, the United States Supreme Court heard oral arguments on an important case discussing the “intent” element of the crime of burglary. While the case arose in Michigan, the case raises an important issue that could come up in a New York burglary case.

Historically, burglary has been defined as an unlawful entry at night into a building owned by another, with the intent to commit a crime therein. Over the years, lawmakers have refined the definition of burglary. For example, nearly all states have eliminated the requirement that the alleged acts occur in the evening hours. Additionally, many states have added language into the burglary statute allowing the crime to be proven by showing that the defendant “unlawfully remained” on the property with the intent to commit a crime.

The exact nature in which the case arose is complex; however, the Court was asked to determine whether Michigan’s “home invasion” statute satisfied the elements of a “burglary” for the purposes of the Armed Career Criminals Act. Michigan defined a home invasion as “breaking and entering a dwelling and while entering or present in the dwelling, committing a misdemeanor.”

END_OF_DOCUMENT_TOKEN_TO_BE_REPLACED

In May 2019, in a New York robbery case, a state appellate court issued a written opinion discussing an important issue that may arise in any case in which there is more than one person named as a defendant. Specifically, the case required the court to determine if the defendant was deprived of a fair trial when the court allowed a codefendant to testify against the defendant after the codefendant negotiated a deal directly with the trial judge. Ultimately, the court found in favor of the defendant, ordering a new trial.

END_OF_DOCUMENT_TOKEN_TO_BE_REPLACED 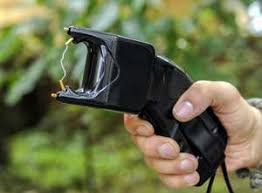