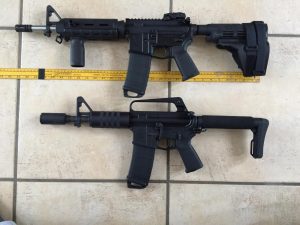 In late May 2021 the Suffolk County Police began sending unsigned letters to purchasers who bought the Delta Level Defense CT4-2A, other firearm that demanded that the purchaser call the Suffolk County police to schedule an “inspection” of the gun.  Since May, at least one other round of letters has gone out.  The letter indicates that those who comply will not be arrested and rumors have been circulating that the Suffolk county Police have threatened those who took the guns out of state or modified them with arrest for tampering with evidence.  It has become clear that the Suffolk County police consider these firearms illegal and Jerry has been charged with a class “B” violent felony for selling 10 or more of these firearms.  He faces up to 25 years in prison.

Although AR-15 “others” are sold throughout the State by reputable gun dealers it does not appear that anyone else has been arrested or charged with the sale or possession of either the DLD-CT4-2A or any other model or make of “others”.  In fact, as we reported recently this law firm won a case involving two Mossberg Shockwave other firearms that was prosecuted in Richmond County.  It does not seem that the Suffolk County Police have raised this issue with any other gun dealers or concerning other brands of other weapons.  Although the Suffolk Count Police Department and the Suffolk County District Attorney’s Office seem to be taking the position that the problem is with all AR-15 based others and not only with the Delta Level Defense.

Other firearms are generally short barreled weapons that cannot be legally considered to be a rifle or shotgun because they are not designed to be fired from the shoulder.  They generally cannot be legally considered to be pistols because they are not designed to be fired with one hand.  In the case of AR-15 others such as the DLD-CT4-2A, this is accomplished by using a SB tactical pistol stabilizing brace and a forward vertical foregrip.  The overall length must be over 26 inches.  Since other weapons are neither rifles nor pistols they do not fit in the categories regulated by the New York Safe Act and so have features that would normally be illegal on a rifle or pistol such as a flash hider, a vertical foregrip and a pistol grip.

Anyone who has purchased a DLD other from Jerry’s or any place else should consult with an attorney who is knowledgeable in firearms laws and in particular the New York Safe Act.  The letters appear to be going out in waves so some people have contacted attorneys even before receiving the letter.  Certainly, do not ignore the letter if you receive it.