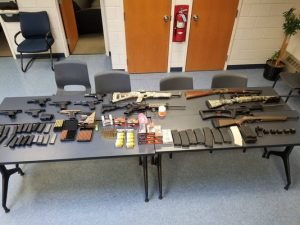 Guns, ammunition and magazines that were suppressed by the Judge

New York, Second Amendment attorney and NRA  Firearms instructor Peter Tilem scored a major victory in Rockland County Court earlier today, when the Judge holding a suppression hearing ruled that there was no probable cause for the arrest of his client and ordered 13 guns, hundreds of rounds of ammunition, and high capacity magazines, called “high capacity ammunition feeding devices” suppressed, meaning that they could not be used as evidence at trial because of the fact that they were illegally seized.  The decision came after an intense suppression hearing in Rockland County Court where two senior police officers testified about the circumstances surrounding the arrest and interrogation of both individuals charged in a 12 count indictment.

Following reports of shots fired on July 8, 2018, in the area of the New York – New Jersey border in Rockland County, police from both New Jersey and New York police departments located three individuals firing weapons which were lawfully purchased and possessed in New Jersey.  The handguns were unlicensed in New York and the individuals were found less than a 1/4 mile over the border in New York.  In addition, some of the weapons which were lawful in New Jersey violated New York’s “Safe Act” and magazines that were legal in New Jersey violated New York’s ban on magazines capable of accepting more than 10 rounds of ammunition.

Two of the individuals that admitted to owning the firearms were ultimately charged in a 12 count indictment with various felonies under article 265 of the New York Penal Law.  The charges included 10 counts of Criminal Possession of a Weapon in the Second Degree each of which carries a mandatory minimum of three and one -half years in prison and a maximum of fifteen years in prison (3 1/2 -15 years).

After fighting the charges for one year, a suppression hearing and jury trial were scheduled for earlier today.  The jury trial was expected to last about one week.  However, following the testimony at the suppression hearing earlier both Mr. Tilem and the co-defendant’s attorney argued vigorously for suppression of all of the evidence including statements that were allegedly made to the police and the guns, ammunition and magazines that were recovered.  The Court took a 10 minute break to make a decision.  After the 10 minute break, the Court requested additional time and adjourned until the afternoon session.  At about 2:30 pm with a pool of juries waiting in the Courthouse the judge issued an oral decision suppressing all of the evidence.  The prosecutor, announced that they could not proceed with the case, absent the suppressed evidence and moved to dismiss the indictment.  The prosecutor is considering an appeal.

As we have written extensively in the past, (see two of our past blogs on the subject, here and here) when a person is arrested without a warrant and physical evidence and/or statements are obtained from the defendant, very often a motion to suppress evidence may be the best defense.  If a person is arrested without probable cause, and physical evidence or statements are obtained as a result of that illegal arrest, the statements or evidence should be suppressed.

There are many fine points to police conduct regarding, arrests, searches, seizures, confessions, miranda and suppression.  A person charged with a crime who believes that there constitutional rights were violated is well advised to consult with an experienced criminal defense lawyer.